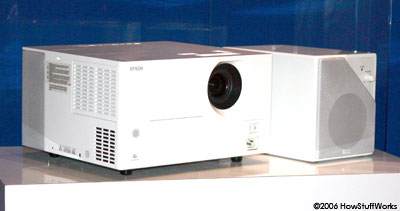 For those who want a 70+-inch picture for a true home theater, but aren't up for installing any of the giant plasma displays coming out this year, there is another path. Nestled in with the TVs, we found a small selection of front projectors built for high-def movies and TV.

Epson was showcasing its entry-level MovieMate 25, a DVD player, speakers and projector packaged together in a microwave-sized box. The basic idea is you can set this on a table, aim it at the wall, connect some speakers and voila: instant home theater.

Epson says you can project an 80-inch picture, with just 6 1/2 feet of space between the projector and the screen.

Epson put their flagship, 720 progressive Powerlite Cinema Pro Cinema 800 through its paces with the robot-on-futuristic-Lexus battle from I, Robot.

Over at the InFocus booth, the centerpiece was the Play Big SP777, a massive, industrial-strength projector that sells for $15,000.

The SP777 is basically the same type of DLP projector used for the "pre-show entertainment" in some movie theaters, but designed for smaller rooms. InFocus also used the tunnel robot attack from I, Robot to show off its projector, and it looked fantastic. It boasts native 1280x720 resolution and 2,000 lumens of brightness. InFocus says it can project a good picture on screens up to 15 feet (measured diagonally). In the demonstration theater, the picture was a respectable 122-inches.

The 720 progressive InFocus In72, launching later this year.

Nearby, in the Sony booth, we saw the massive SXRD digital cinema projector.

This projector is for the emerging digital cinema movie theater market, not the home theater market. More and more movie theaters are replacing film projectors with top-of-the-line digital projectors (see How Digital Cinema Works for details), and Sony is re-setting the bar with this model. It provides 4096 x 2160 resolution (8.8 million pixels), which is four times the maximum resolution of a high-definition television.

Sony didn't have this one projecting I, Robot, but with those specs, we imagine the picture is quite good.

For more information on each of the projectors mentioned above, check out their respective Web sites: