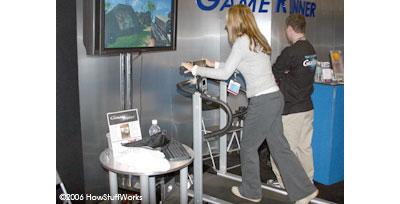 Girl in comfy clothes not included.

Everybody knows the stereotype of the sedentary, out-of-shape gamer. Yes, we know, it's just a stereotype, and plenty of gamers are active people. But wouldn't it be cool if you could combine a workout with a first-person shooter instead of wasting prime gaming time in the gym?

Enter the GameRunner. It's exactly what it looks like -- a game controller built onto a treadmill. It would be impossible for anyone, no matter how fit, to run nonstop through hours of gaming, so it's really meant more for walking than running ("GameRunner" certainly sounds cooler than "GameWalker"). It's compatible with a variety of PC games, as well as any FPS for Xbox, Xbox 360, PlayStation 2 and PlayStation 3. You can use it to play games you actually like instead of trying to work out to "Dance Dance Revolution."

You can get more information (or order one) from the GameRunner site.