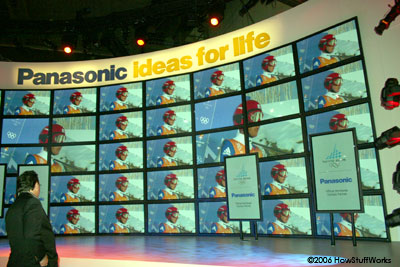 At CES, it seemed like there was one TV set for every attendee.

At CES, the streets are lined with giant TVs. You are never far from a shiny flat-panel display, and you frequently run into tall stacks of them. It was a glimpse into our not-too-distant future.

Most of the TVs are run-of-the-mill big-screen LCDs, plasma displays and DLPs. But there were a few sets that stood out from the crowd.

In the sheer size category, there's the star of the Panasonic TV display, a prototype of a 103-inch, 1080 progressive high definition plasma display.

This is the biggest plasma display to date -- it beats the biggest Samsung plasma by one inch -- and the picture (footage of a lady riding on a motorcycle) looked fantastic.

The set uses Panasonic’s 1080p HD high-speed pixel drive and incorporates a newly developed "rib," the element in a plasma that divides each gas cell, preventing interference between cells to create a clear picture.

At this point, this plasma display is for CES eyes only. Panasonic has not announced a release date.

Samsung just barely lost the plasma competition, but it does have one of the biggest LCD displays in existence, and a 82-inch 1,080 progressive set that will come out at the end of 2006.

On the hunt for interesting technological evolution, we found the HL-S5679W shuffled in with various big-screen sets in the Samsung booth.

This 56-inch set is special because it's a DLP that uses 18 light-emitting-diodes (six red, six blue, six green) as a light source, instead of the conventional light and color wheel set-up. It eliminates the "rainbow effect" distortion seen in DLPs, making for a very clear picture for a rear-projection set. It will also extend bulb life and shorten turn-on time. The set will hit shelves in April of 2006 and will run for $4,199.

Finally, Hannspree wasn't out to win any size or technology contests, but it did show off some of the cutest TVs you've ever seen -- LCD flat screens packaged in unique decorative cabinets.