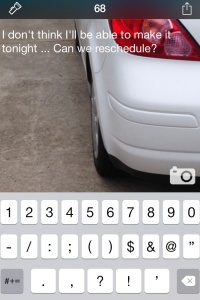 Type n Walk will show you what’s in front of you while you type, but you’ll have to click the export icon at the top right of the screen to send your text to another app.
Screen capture by HowStuffWorks staff

Transparent Texting sounds like a great idea, but it isn't exactly a new one. There are several existing apps that do similar things for Apple and non-Apple phones.

The Type n Walk app from CGactive was released in 2009 and is available in the iTunes store. It allows you to type text on top of a live feed from the camera, but doesn't allow messaging from within the app itself. Instead, you hit a copy button, close the app and open whatever app you want to paste the text into. It works for iOS 6.0 or later on iPhone, iPad or iPod Touch, but is not available for any non-iOS devices.

The Walk N Text Android app by Incorporate Apps on Google Play also lets you type text onto a video feed, and allows you to send what you type to the messaging, e-mail and social media apps installed on your device. The latest version will purportedly give any app on the device a rear camera video streaming background along with a transparent keyboard. There's also a version in the iTunes store (listed as WalkNText) for devices running iOS 4.0 or later that lets you share SMS, Facebook, Twitter or e-mail messages, but does not include the feature that lets it work across other apps.

CamText can actually give rear-camera live-streaming functionality to the Messages app right now, but only if your iPhone is jailbroken. Jailbreaking a phone means removing restrictions from it so that you can download and run third-party software that isn't from Apple's official App Store. You can't get support from Apple on a jailbroken phone, although you can reverse the jailbreak (which will wipe the unofficial apps) and get support. CamText is available through the Cydia app (an App Store alternative), and requires another app called Messages Customiser to work. Cydia and Messages Customiser are also only for jailbroken phones.

There are several other apps with similar features in iTunes and Google Play, with good to terrible reviews. Choose with caution.

But the patent means Apple could incorporate Transparent Texting into a future version of iOS to make it an integrated feature across multiple apps, which would make using it as simple as pushing a virtual button in whatever app you happen to be using. That would likely make the alternatives obsolete, at least on iOS devices. But there's no word on whether this is going to happen or when. If you want this feature now, a third-party app is your only bet.