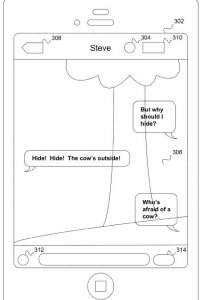 These rudimentary diagrams show the concept of Apple's patent application.

Apple describes a possible balm to the texting and walking problem in their Transparent Texting patent. And it uses technology that most smartphones already have.

The document details a typical SMS (Short Messaging Service protocol) or similar text messaging app, such as iPhone's own Messages, with a solid colored background and solid colored text bubbles containing the ongoing conversation, along with other features like the ability to edit messages, choose or take photos and compose texts using either the virtual keyboard or voice recognition.

It then goes on to describe functionality that makes the background of the messaging app display live video captured by the phone's rear facing camera (or any camera facing away from the user). The video feed appears as if the display itself were transparent and you were looking through it at the path before you.

On the screen, you'll see dialog bubbles containing the text, overlaid onto the video. The bubbles may be opaque, transparent or semi-transparent, although the text will remain opaque for readability. The video will change in real-time as you move around, and the text bubbles will continuously scroll as you type or receive new messages. It describes achieving semi-transparency by alternating opaque pixels with pixels from the video. The video will be at least partially obscured by text, but the more transparent the bubbles, the more you should be able to see. As an example, the figure drawings in the patent show a tree on a hill that moves as the texting session progresses, with transparent word bubbles through which you can still see the scenery, along with an odd scrolling conversation about a cow that appears to be a portion of a joke that you can find in a May 1958 edition of The Rotarian magazine.

The patent indicates that there would be a virtual transparency button or other user interface element that could be used the toggle the feature on and off within a messaging app. Aside from the main example of the text messaging app, the filing goes on to say that the same functionality could be used in other sorts of apps, such as Web browsers like Apple Safari, e-book readers like Apple iBooks and "any computer-executable application in which text is presented over a background" [source: Payne]. This could include social media applications, as well. The patent doesn't confine the idea to smartphones and mentions other configurations of computing equipment that can be used to the same end.

In theory, the user can type or read text while still remaining aware of what's going on in his or her environment, at least directly on the other side of the phone. The patent mentions that the app makes the user less likely to run into or stumble over things while texting.