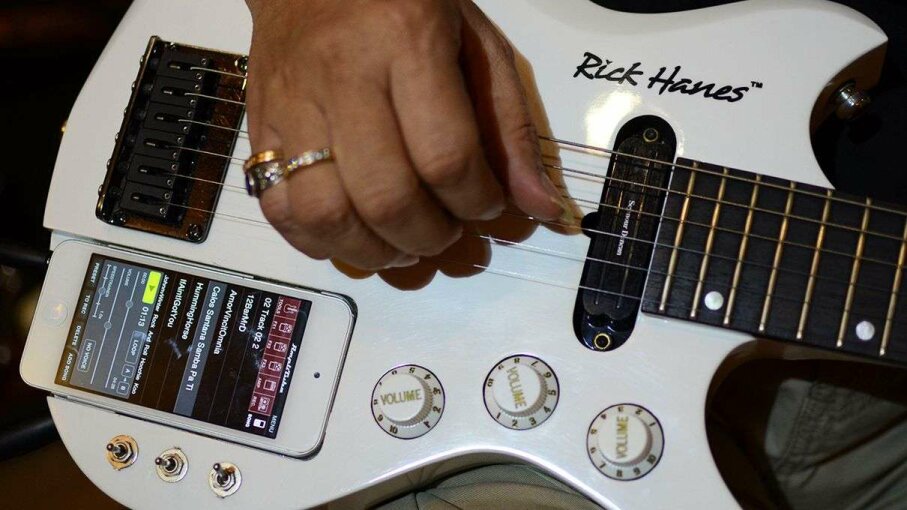 A guitar that works with an iPhone created at the Rick Hanes guitar factory in Sidoarjo, Indonesia. Arief Priyono/Getty Images

When folks talk music and technology these days, it's often about how advances in sharing and streaming — or at least the business model based on those advances — makes it tough for most hard working bands to earn an honest buck. Although Spotify and Apple Music may be giving artists a hard squeeze, the dawn of the digital age hasn't been all bad for melody makers. Technological breakthroughs have also created a whole new sandbox in which musicians can tinker and tailor new tunes.

Just take GarageBand, the Apple software that's helped artists turn their homes into recording studios. The application not only records music, but allows users to lay down different parts of a track separately and then combine them into one song with a wide variety of editing and looping tools. Now that the app is available on tablets and smartphones, musicians can work on their craft just about anywhere they take their gadgets.

"It's kind of like having a portable studio always with you," says Jimmy Kachulis, who teaches songwriting at the Berklee College of Music in Boston. "You can write songs wherever you are and whenever you get the inspiration."

Smartphones are valuable to musicians for many of the same reasons so many of us who can't keep time or belt out a verse still break out in hives when we can't find our gadgets. Note-taking features allow artists to tap out lyrics, and recording technology gives them the power to hum a few bars or sing a melody into the cloud for safekeeping. Email and text messaging functions make those snippets of song ideas immediately shareable.

Recently the artist Curtis Fields signed a record contract; he writes and performs exclusively using an iPhone. Learn more on him in this video:

The album "Carrie & Lowell" is indie darling Sufjan Stevens's latest study in hushed earnestness. The critically acclaimed singer-songwriter recorded some of the album using the memo feature that came with his iPhone while he was in a hotel in Oregon. Don't believe it? Just listen to the sound of a cheap air conditioner churning in the background on "No Shade in the Shadow of the Cross."

Instant idea capturing is only one part of the story. Smartphones can also be souped-up with an array of other apps to enhance the writing and recording process. That includes MasterWriter, a songwriting tool suite that comes equipped with a dictionary and thesaurus, and Notion, a composition and notation app that transposes notes into a ledger as you play them on a keyboard, guitar or other instrument interface on your phone. Meanwhile, a metronome app called Tempo is available to make sure musicians never lose their rhythm.

"All of the stuff that we used to have to carry around, like portable cassette machines and rhyming dictionaries, is all integrated into your portable device," Kachulis says. "Sometimes, you can find it all in one application."

Now That's Interesting
One of the earliest recording devices was the phonoautograph, a horn-based contraption created in 1857 that directed sound to a diaphragm, and used levers to scratch out a sketch of what it heard.