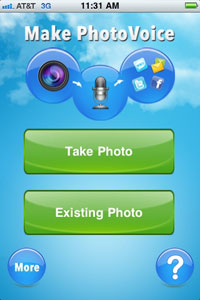 A screenshot of the PhotoVoice app
HowStuffWorks.com

In most ways, PhotoVoice is a pretty garden-variety app. It can run on any iPhone, iPad or iPod Touch that has iOS 4.0 or a later operating system, which means that it will work with the iPhone 3GS and every model that comes after that. Unfortunately, if you use another type of smartphone, you're pretty much out of luck; so far, O'Day hasn't created versions of PhotoVoice for the Android, BlackBerry or Windows operating systems. The app takes up just 5.9 megabytes of space in your phone's solid-state memory, about as much room as two or three full-sized snapshots [sources: iTunes, Ritchie].

PhotoVoice costs just 99 cents to download -- but if that's too rich for your blood, there's also a free "Lite" version. The most important functional difference between the two is that the voice-and-photo combos created with the Lite version disappear after you send them, while the paid version lets you store them for future use. One other advantage is that if you're still using an older iPhone or first-generation iPad with the iOS 3.1 operating system, the Lite version will run on those devices [source: CNet.com].

Using PhotoVoice is fairly simple. When you click the app's icon, an opening screen gives you the option of either taking a photo or using one you've already taken from the phone's picture roll. Next, you can add a voice comment or greeting of up to 10 seconds in length by tapping "record." Then, hit "create & preview," and your voice and photo will be combined into a single small MPEG-4 file that can be played on another person's smartphone or computer. Finally, you can share your PhotoVoice creation with a friend -- or a whole lot of friends -- by attaching it to an e-mail or an SMS message, tweeting it or posting it to Facebook [source: Photovoicesendnow.com].