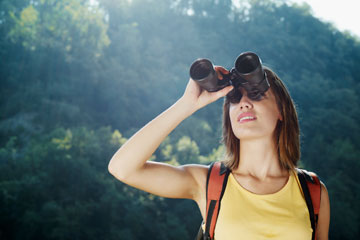 Birding began with the invention of hand-held binoculars.
iStockphoto/Thinkstock

It might seem a bit out of character for a bird-watcher -- that old-school, nature-loving soul who patiently traipses through the woods, seeking a brief glimpse of some rare avian species -- to use something as artificial as an iPhone app to assist him in his quest. But remember that bird-watching is a relatively recent pastime, only about a century old, and that it emerged from the invention of a new gadget: hand-held binoculars. Binoculars made it possible for the first time to observe wild birds and examine them in detail from a distance while they were still alive; until their invention, birds were shot down to be handled up close [source: Britannica.com].

Also remember that amateur ornithologists are a studious, precise lot, whose personal libraries are filled with books like Roger Tory Peterson's 1947 "Field Guide to the Birds," the definitive compilation of field markings for North American bird species found east of the Rocky Mountains [source: Britannica.com]. But those dog-eared reference tomes, useful as they are, can get pretty heavy when you're toting them in your backpack, and it's tough to thumb through a thick book with one hand while you're trying to hold binoculars steady and track a yellow-faced grassquit. As usual, it's a lot easier to just pull your iPhone out of your pocket and look up what you need to know.

That's why birders have become so enamored of a new generation of iPhone apps designed to help them get the most out of their pursuit.

In some ways, the iPhone is the Swiss Army Knife of the digital age. In addition to using it to make phone calls, you can use it as a book, an Internet browser, a video and still camera, an audio recorder and even as a notepad for recording your observations. And those are just the things you can do with the standard apps that come with the phone.

Birders can make use of all these standard tools in the woods, but they can also customize their phones with add-on gadgets and software apps to do even more. Spyglass, an app designed for outdoors enthusiasts, contains a compass, sextant, GPS and other navigational tools that can help a birder to precisely document the location of a sighting. It even includes a binoculars function, though the 5X zoom isn't as good as what you could get with conventional binoculars with optical magnification [source: iTunes, Karpen]. Camera manufacturers now offer add-on optical telephoto lenses that fit onto iPhones, so a birder can shoot fairly high-quality digital images [source: Photojojo.com]. With an add-on microphone such as the Edutige i-Microphone, a birder can boost the sound of bird calls and record them clearly for later study [source: Schmoker].

But amateur ornithologists will benefit especially from iPhone apps designed specifically for them. There are two basic types: 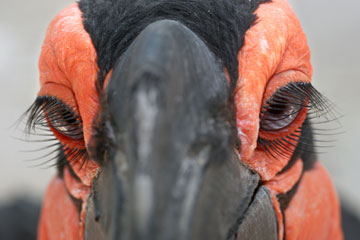 Admittedly, I'm not that knowledgeable about wild birds, but I can understand why birdwatchers are so passionate about their hobby. When I was a young boy, my family had the good fortune to have a robin's nest on the ledge outside our bathroom window. We kept the window, which opened to the side, propped partially open all summer, so that we could observe the mother robin and the hatching of her eggs through the narrow space. I was sad when the little birds finally grew enough to leave the nest and make their way in the world, but I liked to think of them building nests on windowsills of houses where other little children could delight in them.