Is there an iPhone app for making movies? 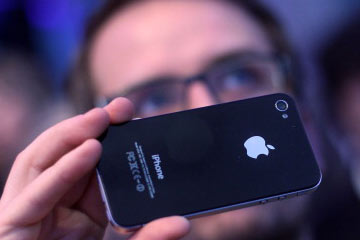 Many iPhone owners simply use the video option that's built into the camera app that ships with the smartphone. But if you want to
©Miguel Villagran/Getty Images

The iPhone was hardly the first phone to include a camera when it was released in 2007. Cell phones have been capable of taking photos and videos for years, but competition between Apple's iPhone and cutting-edge Android smartphones has driven huge jumps in technology. In 2007, Apple's phone had a 2 megapixel sensor and no flash. The iPhone 4S, released in 2011, incorporated a vastly superior 8 megapixel camera, flash and 1080p video recording -- good enough for some amateur filmmakers to use iPhones in place of dedicated cameras.

iPhones and Android phones alike are powerful enough to give all of us the tools necessary to make fun video clips or preserve memories in home movies. And shooting video doesn't take anything fancy. Opening up the built-in camera app and pressing record will start the video rolling. Of course, any filmmaker will tell you that there's a difference between a movie and raw footage. Thankfully, there are iPhone apps to help you turn that jumble of clips you shot in your backyard into a cohesive home movie.

Want to shoot a movie on your iPhone? All the tools are right there at your fingertips. We'll start with the apps Apple offers to do basic moviemaking right on the iPhone, then step up to the next level with some third-party video apps that add functionality that's missing from the iPhone's camera software.

The iPhone 4S shoots video at a resolution of 1080p and at a speed of 30 frames per second. The video has a bitrate of about 24 Mbps, or 180 megabytes per minute of footage. That's a lot of space. A 10-minute movie will take up almost two gigabytes of storage, which is important to remember when shooting video on a 16GB iPhone. The 32GB and 64GB models make it easier to shoot without sweating storage space.

Say you shoot a fun, 10-minute video of a birthday party and want to add music and some opening titles. What do you use? Well, you can always copy the video to your computer and edit it there. But for a simple video, Apple'siMovie is an easy way to create a movie right on the phone. The app costs $5 and offers a streamlined version of the software Apple offers on Mac OS X, with touch controls for splicing together clips, adding music and sound effects, and publishing a movie online or saving it to the iPhone's Camera Roll. iMovie offers all the basics needed for editing, like transitions and titles. It's a beginner-friendly tool for anyone shooting short movies on the iPhone.

Now, let's get a little fancy. The default iPhone camera app is great for straightforward shooting, but some third-party apps on the App Store are must-haves for certain types of movie making.

Making a Movie with FiLMiC Pro or Frameographer 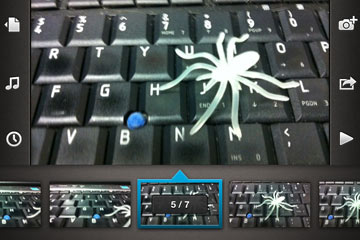 Believe it or not, the frame rate of a movie -- the speed at which individual frames are played back in front of our eyes -- has a big impact on the audience. Most professional films are shot at 24 frames per second (fps), but digital cameras often shoot at 30 or even 60 frames per second. Film buffs with a critical eye notice the difference, and some prefer the look of 24 frames per second. So how do you make a 24fps movie with the iPhone camera, which normally shoots at 30fps? Simple: Download an app.

FiLMiCPro is a $4 app packed with filmmaking features. iMovie is all about editing clips, while FiLMiC Pro is about shooting better video. It allows you to adjust frame rate to 24 fps, double the bitrate to 48 Mbps for even higher quality video, choose between three different focus/exposure systems and change the resolution to something lower than 1080p. While the iPhone can't measure up to the variety of options available on professional video cameras and DSLRs, FilMiC Pro gets you a step closer than the default camera app.

Some types of movies are shot at an even lower frame rate than 24fps. Time-lapse videos, for example, are often shot at 1 frame per second or even slower. There's a great app for that, too. The $3 Frameographer app is built for shooting stop-motion movies comprised of hundreds or thousands of still images captured with the iPhone camera. Frameographer also offers shooting and editing tools for making stop-motion animations. Creating an animation is a very different process from shooting a traditional movie, but with the right app in hand, the iPhone rises to either challenge.

Writing about iPhone apps is both great and terrible. On the bright side, there are a million great apps out there that add to the functionality of Apple's phone. But that can make it pretty hard to choose some of the best! FilMiC Pro is a standout to me thanks to how many editing options it offers. Thankfully, Apple's iMovie has the basics covered, so even photography newbies can shoot video on their cameras. The barrier of entry has never been lower.