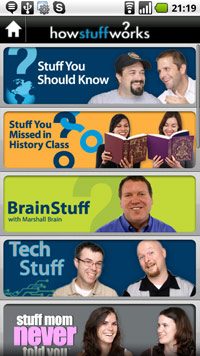 In late 2010, HowStuffWorks released an iPhone app into the wild. Like all parents, we held our breath and watched as the app took its first baby steps. Would iPhone users download it? Would people like it? Would we have to change our last name and move to a different part of the world?

Two things became abundantly clear very quickly: iPhone users loved the app, and Android users were miffed that they didn't have one of their own. Immediately, we set to work to building an Android application to satisfy the enthusiastic -- and vocal -- Android owners out there. And now it's here! So which one's right for you?

The two apps have comparable features, so it really boils down to your opinion of the iPhone versus the Android operating system. Here's a quick cheat sheet: The iPhone is sleek, sexy and available on both Verizon and AT&T in the United States. It also has access to the largest library of apps in the smartphone market. But the system is locked down -- you can use it the way Apple wants you to use it. Customization is limited, and you may find yourself rattling your cage if you're more the do-it-yourself type. And while there are a couple of generations of the iPhone available on the market, in general it's a one-size-fits-all scenario. If you don't like the iPhone's design, you're out of luck.

You can find Android phones on all the major carriers in the United States. Manufacturers like Samsung, Motorola and HTC have Android handsets. That means you've got plenty of options when it comes to handset design. Android takes a more open approach to the operating system game. Rather than cage you in, Android sets you free in a huge landscape filled with adventure. Want to install an app that's not part of the official Android market? No problem -- Google lets you do that! But that adventure comes with risks -- you might encounter some malicious software while you're exploring the virtual world.

So which is best? For my money, the Android system wins out. It has its share of problems, including fragmentation in the market -- walk up to 10 Android owners and ask which version of Android each uses, and you'll get at least three or four different answers. But the freedom Android offers makes up for its shortcomings. You don't have to worry about an Android executive suddenly deciding that phones should no longer have buttons or telling you which apps you can or can't download on your phone. And you've got plenty of choices when it comes to carriers and phone styles. But that's just my opinion. Which one do you prefer? Leave a comment and let us know.