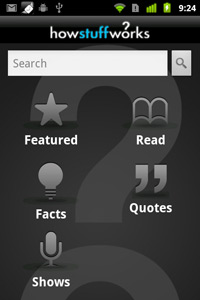 In 2011, we at HowStuffWorks.com learned a valuable lesson: There's no rest for an app developer. In late 2010, we'd launched a smartphone app for the iPhone. Our iPhone-owning fans downloaded the app and gave us great reviews. For an afternoon, we spent our time giving each other high-fives and patting ourselves on our collective back.

But then that lesson kicked in full-speed. While positive reviews and helpful suggestions poured in from iPhone users, we also saw a growing demand from Android phone owners. It's safe to say we heard just about every variation on "Where's our app?" you can think of. We had an Android app already in the works -- so, hands still stinging, we got busy getting it ready for launch.

After months of design, development and testing, that app is ready, and you can head to the HowStuffWorks Android app page to download it. It's a remarkable program that gives Android owners access to all the different types of content we create, from podcasts to articles to blogs. But being able to give Android users an app they've been asking for is just one reason we're excited. Join us to find out more.