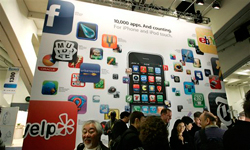 A display at the Macworld Conference and Expo in San Francisco, Calif., in January 2009, promotes the iPhone's capability to run many applications.
AP Photo/Paul Sakuma

When Apple released the iPhone in June of 2007, who knew how popular downloading applications or small programs would be? If you have one, you understand. Whether it's automotive, medical, or productivity apps or just games, iPhone users can find something for everyone in Apple's App Store. And while many of the apps available are fun and even cheesy, some of them are outright odd. We've put together this list of strange apps in hopes of pointing you in the right direction if that's what you're looking for.

Attempting to determine the five strangest iPhone applications is no easy task. After all, what can be more subjective? Surely, not everyone has the same tastes and preferences -- what you may think is strange, the person sitting next to you in a coffee shop may find ordinary.

After recently surpassing the 1 billion mark for apps downloaded, and with independent companies introducing new apps every day, the trend doesn't seem to be slowing down anytime soon. With more than 35,000 apps available in the App Store for download, narrowing down the five strangest is nothing more than an exercise in futility. In no particular order, it opens with a light and fun way to turn an ordinary picture into a work of wacky art. Let's begin, shall we?

Our faces identify our very essences. So what can be more entertaining than an iPhone application designed to contort, stretch and liquefy your favorite photos? That's precisely what Face Melter, designed by Nico Becherer does. Face Melter can turn an ordinary picture into an image reminiscent of a creature out of a Harry Potter novel. For $.99, or $1.99 for Face Melter Pro, you can tweak any photo. Some of the goofy things you can do include stretching noses, turning up or down mouths to form grins and scowls, and magnifying eyes to create funny depictions of your favorite faces. Face Melter utilizes the iPhone's camera roll or pictures imported through iTunes. Face Melter even works with Flikr so you can access you favorite photo albums through the online photo host site.

While you will quickly see, some of the apps on this list straddle the line of morality. However, Face Melter is plain, old-fashioned fun. Like Photoshop, Face Melter has no limits of creativity. It comes down to the user. Your iPhone is the canvas and your imagination creates the masterpiece. Now, let's move from a goofy app to one that just seems weird.

When Apple introduced the iPhone 3G, the phenomenon known as downloading applications, or apps, launched with it. It took only nine months for Apple to blow through 1 billion apps downloaded through its App Store. The lucky No. 1 billion, 13-year-old Connor Mulcahey of Weston, Conn., cashed in with a $10,000 iTunes gift card, an iPod Touch, a Time Capsule (500 GB wireless hard drive) and a MacBook Pro laptop computer. The total value of his prize came to $13,500. Not bad for being at the right place at the right time. 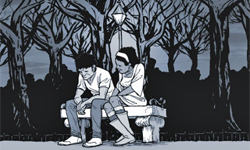 Available in 80 countries as of May 2009, the iPhone has worldwide appeal. One app is aimed right at the very heart of the everyday relationships between men and women. Ruben & Lullaby is similar to a virtual comic book. The app is a game where you control the emotions of a man (Ruben) and a woman (Lullaby) as they go through their first fight as a couple. How it works is by utilizing the iPhone's built-in accelerometers to interact with the two lead characters. Shake your iPhone to upset Ruben. Stroke the phone's screen to make Lullaby sad. These movements and more force the characters into situations where you must control their interactions in order to reach the ending. Sound kind of odd? Perhaps it is. But as we suggested in the beginning, different strokes for different folks.

What is undisputable is the creativity of this app. Noted graphic novelist Ezra Clayton Daniels created the visually stunning artwork and the app moves much like a cartoon. How the story ends is entirely up to you. The characters respond to each other based on their feelings. You control these feelings with the tips of your fingers. If you've ever wanted to meddle in two people's relationship, this is the app for you. Maybe you'd just like to practice for when you find yourself in a similar situation. Whatever the case, Ruben & Lullaby is growing in popularity, especially among adults.

As for the next app on our list of the five strangest iPhone apps, most would agree that its content is purely juvenile. Here's a hint, it's something we all do and can't help find embarrassing. Ready to have some fun, even if it may seem gross? 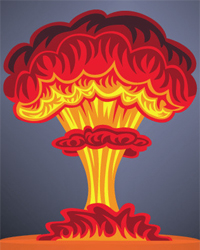 OK, admit it. Farts are funny. Well, maybe not while you're riding in an elevator full of people or sandwiched between two people in the backseat of a car. But what is more uncomfortable than the eerie quiet following the sound of a fart ripped in public? That's exactly what Atomic Fart is all about.

Atomic Fart turns your iPhone into a virtual sound box full of various flatulent sound effects. Free for the partial version or $.99 for the full version, Atomic Fart boasts 30 high-quality fart sounds. What's more, with Atomic Fart you can activate a timer or motion sensor that will let 'er rip in your pocket or wherever you hide your iPhone. That way you can sit back and watch people around you squirm at the sound of a "pants stainer," "juice anyone?" or "what just happened?" custom-made Atomic Fart.

The partial version will have the occasional advertisement pop up on the bottom of the screen, while the full version gives you more features including a drum set that lets you either play your fart machine freestyle or in the form of a "Simon Says" game. Atomic Fart isn't for everyone. It may take a twisted mind to enjoy. Nevertheless, Atomic Fart has a place on our list of the strangest of iPhone apps.

The next app to make the list borders on the verge of disturbing. If you're a fan of black magic, it may be right up your alley.

This app may allow you to take out your frustrations on that nagging boss or teacher who just doesn't understand you in a fun and safe way by turning your iPhone into a voodoo doll. That's right. With iVoodoo, you can create up to five voodoo dolls at a time. What you do is paste a picture of your favorite (or perhaps least favorite in most instances) person on the face of the doll. You can upload these photos through iTunes from your computer or grab them from existing albums already on your iPhone. Here's where the fun begins.

With iVoodoo, you can poke pins into different areas on the body of your doll that represent one of seven feelings or attributes including positive, negative, wealth, power, success, love and spirituality. In addition, you can choose to infuse your pins with power through the meditative feature. Like every other app, you utilize the iPhone's touch screen interface to drag pins to locations on your doll you feel will inflict the most pain. IVoodoo may serve as the ideal stress reliever you need to cope with the everyday ups and downs of today's fast-paced world. This app is strange, even weird. But it pales in comparison to the final app on our list of five unorthodox iPhone apps.

The final app to make the list really pushes the limit of morality. Rather than simply being strange or weird, it makes the leap to disturbing. In fact, it's been pulled from Apple's App Store so you can't even download it anymore. Is the suspense killing you?

Some iPhone apps cross a fine line -- going from strange but fun to disturbing and immoral. The folks at Apple certainly faced this dilemma with Baby Shaker. Introduced by Sikalosoft in April 2009 (but no longer available via the App Store), Baby Shaker was a game that depicted a cute baby swaddled in blankets. The point of the game was to shake the iPhone until red Xs replaced the cuddly baby's eyes. The red Xs signified you killed the baby and a timer kept track of the speed at which you performed virtual infanticide.

Each time the user started the application, it opened with a disclaimer stating not to ever shake a baby. But the disclaimer didn't stop many from becoming outraged over the app. After outcries poured in from representatives of the National Center for Shaken Baby Syndrome, Apple pulled Baby Shaker from the App Store. The company later released an apology [source: CNET].

If you'd like to learn more about the iPhone and other cool gadgets, be sure to visit the links on the next page.

Apple has made it a point to look at each application before it is to be offered in its App Store, a daunting task considering the sheer volume of apps being developed daily. Before any app makes its way onto your iPhone, Apple makes sure it meets certain guidelines. After the whirlwind of controversy surrounding Baby Shaker, Apple has been especially careful of what it makes available. Recently, Apple rejected an app that allows users to apply a photo over the face of Jesus and other religious leaders. The app, dubbed Me So Holy, crossed the line of what Apple felt to be offensive material, and Apple exercised its option to disallow the application on the grounds that some people or religious groups would find the app inappropriate.