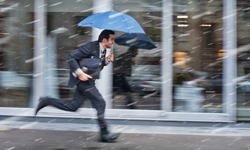 Don't get caught off guard and in the rain -- go exploring with some of the ever-evolving mobile weather apps.
Dimitri Vervitsiotis/Getty Images

"You know what they say about this city…if you don't like the weather, wait five minutes."

It seems like that's been said of every city (except perhaps Seattle).

Sometimes glancing outside -- or even being outside -- doesn't reveal the entire story, and even the most live-and-let-live types occasionally wonder if they should bring a jacket. Don't get caught off guard and in the rain -- go exploring with some of the ever-evolving mobile weather apps.

Some people believe that your preferred mobile platform reveals a lot about you; some people are more concerned about the weather's ability to make or break your day. Whatever the case, not all mobile weather apps are created equal, so we've examined a variety of weather-related options for phones, pads and pods. From the pretty to the profound, for the curious onlooker to the thrill-seeking storm enthusiast, there's a mobile weather option destined for your home screen. 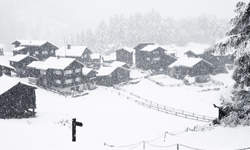 Most of the mobile weather apps we'll discuss are geared toward practicality: acknowledgment of how weather influences life, while on the run, based on the need to be alerted instantly of impending doom. So before we get down to business, let's take a moment to appreciate weather's potential for beauty, serenity and relaxation.

Kittehface Software's Snowfall Live Wallpaper doesn't help when it comes to determining ski conditions, but this app might provide some comfort to Android users eagerly awaiting the first flakes of winter. The free version of Snowfall Live Wallpaper depicts a gentle vision of white flakes settling softly on a landscape of pine trees. For just 99 cents, a more detailed version features variations such as cheerful Christmas light decorations, as well as day and night settings. Kittehface doesn't claim that every snowflake on this app is unique, but it's definitely different from the usual smartphone wallpaper options.

Snowfall Live Wallpaper doesn't change according to the actual weather, so those seeking a less frigid climate have a bit of control. If the sight of snow is more stressful than soothing, Kittehface also offers similar applications in Thunderstorm and Blue Skies, which, like Snowstorm, are pretty self-explanatory, but no less dazzling. And though the most frequent user complaint is that these live wallpaper apps will drain any phone's battery rather quickly, it might be worthwhile to for the privilege of carrying instant Zen in your pocket.

If you'd rather know what's going on outside, the next pages will discuss more practical mobile weather apps. 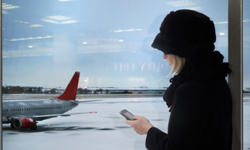 A handful of basic features, complemented by a few well-chosen playthings, is sometimes enough to satisfy the masses. BeWeather caters to the BlackBerry crowd by keeping users up to date on weather conditions with just enough personalization to make things interesting.

BeWeather, a $9.99 app by Bellshare GmbH, pinpoints a user using GPS or cell data (and users can also add other locations). From there, BeWeather provides a host of up-to-date weather conditions tailored to the location, as well as detailed 24-hour and seven-day forecasts. Weather advisories and alerts can be pushed to the phone so you won't get caught off guard. Sunrise and sunset times let you know how much longer you can bask in the remaining daylight.

Beyond the basic weather reporting functions, BeWeather also offers a bunch of customizable options, including the ability to view weather Web cams and listen to weather radio feeds. The home screen icon displays current conditions for an overview at a glance. Radar maps are animated for extra visual interest, but users can easily substitute the app's built-in maps for feeds of other weather services' maps, if preferred. The app can also tie into a Twitter account, for the easy and fast ability to brag about spectacular weather or bemoan the gloom and doom.

Is weather more of a hobby than a mere fact of life? The next pages will illuminate options for the more adventurous. 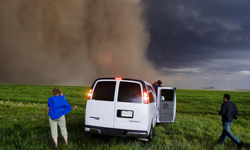 The changing sky takes a turn for the worse during a Tempest Tours storm chasing tour across the Great Plains states of the United States of America outside of Hemmingford, Neb.
Jeff Hutchens/Getty Images

Storm Chase Buddy, an Android app by AndroidFanBuddy.com, is designed to provide and organize a lot of weather-related information. This app provides basic, up-to-date weather, but the really interesting stuff comes in from the regularly updated feeds.

Storm Chase Buddy provides an easy access point to catch up on RSS-based weather-related news streams, police and emergency scanners, airport conditions and extreme weather alerts. Information is provided alongside its corresponding point on the map, and Storm Chase Buddy also has a journal/log feature, so weather trackers can keep all their notes in one place.

And considering all the data that Storm Chase Buddy provides, it sounds like this app has potential to be overwhelming, but menus are concise and easy to navigate. Plus, it's good looking. The app takes full advantage of Android phones' sharp, detailed displays and crisp colors. The mesmerizing rainbow of radar might just look better on your phone than it does on your television screen. At $2.99, Storm Chase Buddy can keep all your weather curiosities in one place.

Looking to take your data-tracking to the next level? 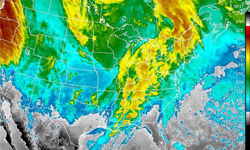 This image from the GEOS-8 satellite shows a band of severe weather streaking up from the Gulf of Mexico across the southeastern United States on Dec. 19, 2002.
NOAA/Getty Images

No room for fluff and sunshine here! Base Velocity's RadarScope is geared toward serious weather hobbyists and storm trackers who thrive on data, number-crunching and attributing precise metrics to the unpredictability of nature.

The data comes from NEXRAD (Next-Generation Radar) weather reporting sites in the United States, Puerto Rico and Guam. One of the most revered features of the data is that it is unrendered (meaning, it's not smoothed out for the purposes of making it faster to transmit and load, and easier for your screen to process and display). At $29.99, this program isn't exactly an impulse download, but RadarScope's information is a lot more specific than simpler, less expensive apps.

Browse current tornado, hurricane and flash-flood warnings, or view summarized storm reports and lightning data. Use a touchscreen or trackpad to scroll around the weather map, zoom in on points of interest and even animate the radar on a selected area. RadarScope continues to update the map even as the program's in use.

It's available for the iPhone and iPad, and can also tag along with you on a Mac laptop. Users report that the interface is easy to use and the data stream is reliable. 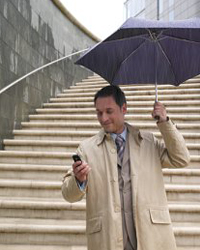 When you're deciding what to wear to work, or growing wary of that rapidly darkening sky, the Weather Channel app can quickly provide the information you need.
A J James/Getty Images

Some mobile weather apps show that simplicity, well done, can be immensely satisfying. The Weather Channel's proprietary app is practically ubiquitous, and rightly so: It's available for just about every mobile gadget with cell service or an Internet connection. It may not be as fast as some of the previously mentioned apps, and the feature list is less fancy. But it's free, easy to use, intuitive and quickly comfortable.

Features vary slightly, from Android to Apple to BlackBerry formats, but the basics remain the same. And, yes, these features are pretty basic. Users can see stats such as current temperatures, precipitation, wind, UV index, sunrise and sunset, all tailored to current and preferred locations. Radar maps are updated regularly; weather alerts are provided for saved areas. All are set upon the soothing bright blue that'll be instantly familiar to anyone who's ever seen The Weather Channel on TV, anytime, ever. True, this mobile weather app probably won't satisfy the storm hobbyists -- it's not quite as quick, the data sets aren't specific enough -- but like on television, The Weather Channel's app meets the needs of the masses. When you're deciding what to wear to work, or growing wary of that rapidly darkening sky, the Weather Channel app can quickly provide the information you need.

For more information about mobile weather apps and other related topics, follow the links on the next page.