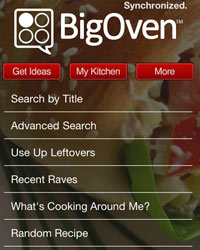 Need to use up the leftovers you have in the fridge? Big Oven can help.
Screenshot by HowStuffWorks.com

Can you imagine looking through all 40,000 dishes in Allrecipes' catalog? Well, here's an app with an absolutely mind-boggling number of recipes: BigOven, which proudly proclaims its 170,000 recipes in its app title. The free BigOven app earns its name with a massive catalog of dishes that can be searched by title, ingredient, keyword or course. The app has been downloaded from the iTunes App Store more than 5 million times [source: BigOven].

BigOven's sheer variety of food makes it an easy recommendation, but there's a lot more to the app than an endless list of recipes. Free BigOven.com accounts grant access to a menu planner within the app, and the ability save favorite recipes and upload photos and reviews. The menu planner allows you to drag and drop recipes around a monthly calendar to plan out your meals days, weeks or months ahead.

When the menu planner is completed and leaves beta status, it will move up to BigOven's pro tier, which costs $16 per year for subscribers. That payment opens up far more functionality and interaction with BigOven's Web site. For example, you can edit the menu planner from your computer, and then access it on the mobile app while you're at the grocery store. Menu planner can automatically import its ingredient lists into a grocery list, and the app will also import information from your receipts. Finally, subscribing provides detailed nutritional information for the thousands of recipes in BigOven's library.