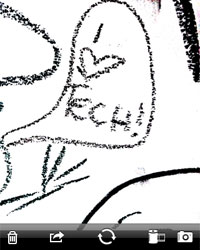 With scanning apps, you can scan notes from whiteboards and blackboards. This was scanned from the HSW blackboard via the JotNot app, which you'll learn about on the next page.
HowStuffWorks.com

Even though we live in a digital age, some of the information you need -- a fly-casting article from your granddad's 1952 issue of Field and Stream, receipts from your business trips, an idea you jotted down on a restaurant napkin -- is still in old-fashioned paper form. That makes it easy to misplace and cumbersome to carry around. You could scan it electronically and create a digital copy on your computer's hard drive. But that requires lugging that pile of paper back to your desk, waiting while the scanning software loads on your computer, carefully positioning all the pages face down, and getting the lid on your desktop scanner to close properly (no easy task, in the case of hardcover books with stiff bindings).

Gee, that seems like a whole lot of work for a little convenience. Wouldn't it be so much easier if you could simply snap a picture of a paper document with your iPhone and then automatically convert that picture into a searchable electronic file you can access on any of your devices? Wouldn't it be even better if your phone could use optical character recognition (OCR) to convert the item's contents into text, so that you could paste the information into an e-mail or a word-processing document?

Well, surprise -- you can. There are a slew of apps that will turn your phone into a pocket-sized scanner that does much of what a desktop scanner does. Additionally, you now can scan stuff anyplace anytime -- think the public library, government records archives, and other places you wouldn't want to lug a portable scanner and laptop. And you might find a simplified iPhone app easier and faster to use than a complicated desktop scanner program. Here are five scanning apps to consider downloading. 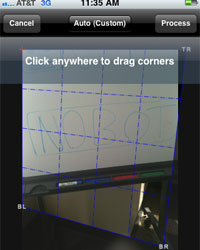 Like many scanner apps, the JotNot Pro app enables you to set your own boundaries to focus in on the text you'd like to scan.
HowStuffWorks.com

JotNot Scanner Pro, developed by MobiTech 3000, is a bare-bones app without a lot of fancy features. Basically, it's a miniature copy machine, designed to take pictures of text documents that you can e-mail to your computer and then use in other, higher-powered programs. What makes JotNot so valuable is it takes really, really good pictures. The app automatically adjusts the perspective, sharpness and contrast of your iPhone camera to optimize images of text. It also allows you to crop a picture of a document by adjusting each corner independently of the others, and then tinkers with the contrast ratio, perspective and alignment on the fly. The app also allows you to convert color images to black-and-white, a big plus if you're going to run the image through an OCR program on your computer later.

Because of its simplicity, JotNot has some limitations, according to MacWorld reviewer Kate Dohe [source: Dohe]. It doesn't provide e-mail, sharing options or over-the-air printing, and there's no PDF conversion, so you have to save images to your iPhone photo library as JPGs instead. Dohe found that JotNot performed best with black text on white or light backgrounds, and conversely, created the poorest images from light text on dark or boldly colored or patterned backgrounds. She also noted that JotDot is a good companion program to Evernote, the popular free-form cloud information manager; Evernote's OCR feature was more accurate when using images created by JotNot, compared to images taken with the iPhone's basic camera app [source: Dohe]. 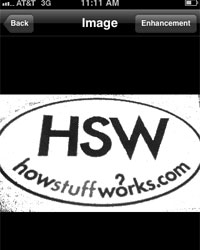 This HSW sticker was scanned with the Genius app.
HowStuffWorks.com

If you're the sort of person who feels safer buying an established brand rather than experimenting with an upstart app, Genius Scan might be the best choice for you. The Grizzly Lab product is one of the most popular iPhone scanning apps around, with millions of users. Like JotNot, it's designed to optimize the pictures your iPhone camera takes, correcting perspective and other factors to create a sharper image of the text. It will also automatically straighten skewed or off-center images -- a plus when you're trying to capture information from a whiteboard at a corporate presentation or a sign.

The program creates sharp black-and-white images and is capable of scanning multipage documents and melding the images into a single file. Unlike JotNot, it's capable of creating PDF documents that you can export to iBooks or any app that's capable of reading PDFs. With the premium Genius Scan+ version of the program, you also can easily export documents to Dropbox, the cloud document-storage site, and to Google Docs and Evernote. InformationWeek reviewer Todd Ogasawara notes that you can use the app to capture "whiteboard sessions, receipts and other papers and signage on the go" to share in various formats. On the downside, he wrote, although the app works on an iPad, it doesn't scale to the larger display [source: Ogasawara]. 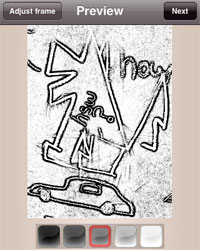 Even though this was scanned from a blackboard, the app managed to convert the background to white and the writing to black when the "black-and-white" mode was selected.
HowStuffWorks.com

Like Genius Scan, Pixoft's TurboScan is a good bet if you're looking for a scanner app that a lot of other users seem to like. The app had a five-month run in 2012 as the No. 1 business app download in the iPhone app store. Unlike other apps that emphasize simplicity and ease of use for smartphone newbies, TurboScan seems targeted at the sort of tech-savvy user who needs 32 gigabytes to have room for all his or her apps, and who likes a load of intricate features and functionality.

When you scan an image with TurboScan, for example, you can adjust manually for brightness and rotation, and choose one of multiple modes (color, black-and-white or photo). But the app has a lot of automatic image-optimizing features as well. For example, it's designed to compensate for the skewed perspective that occurs when you don't manage to hold the iPhone camera precisely parallel to the document you're shooting, or when the image is an open book that's slightly cured. There's also a nifty feature that allows you to take three consecutive pictures of a document and then combines them into a single, higher-quality image. Brighthand.com reviewer Mac McCarthy gives TurboScan a generally positive review, noting that it "produces good quality images and easy doc sharing, although it might take you a bit of work to optimize your images" [source: McCarthy].

At $6.99 for a download, Readdle's Scanner Pro is one of the pricier scanning programs around, but it justifies that premium cost by being both easy to use and offering an extensive array of features, including some that you won't find in competing programs. One of Scanner Pro's nice features is that it senses where the edge of the document is, which ensures that you don't take a picture of a page and somehow leave out some of the text. But the program's big strength is that it lets you do a whole lot of stuff to documents once you've scanned them. It will work with multiple pages and includes tools for moving, deleting and combining pages, and it also lets you password-protect the finished PDF, so only the right people get to see sensitive information.

ScannerPro will let you upload documents to Dropbox, Evernote, iDisk, or any other server that uses the WebDAV format for facilitating collaboration between users, and it will also let you send your scans to Google Docs. For a 99 cent fee per use, Scanner Pro will even fax your documents to someone who still uses that technology [source: AppAdvice.com]. 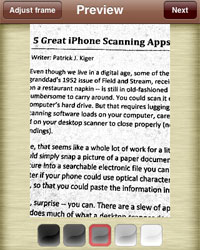 The printed text of this article was scanned with Perfect OCR.
HowStuffWorks.com

One of the limitations of using the iPhone as a scanner is that most scanning apps aren't that good at optical character recognition, which translates a picture of a document into digital text that can be searched or copied and pasted into a word-processing document. The reason is that unlike a flatbed scanner, which holds a document motionless, illuminates it and creates a close-up scan, the images that a phone camera takes are shakier and contain imperfections like shadows, which make it more difficult to accurately convert the image to digital text. One program that strives mightily to get over that hurdle is Perfect OCR. It uses special algorithms -- the mathematical formulas that decipher images -- which are designed to compensate for the uneven lighting and shadows and boost contrast.

Additionally, PerfectOCR contains a feature called SureScan, which is designed to compensate for the shakiness in your grip. The app's maker, Pixoft, claims 90 percent accuracy in converting images to text. In case you're planning to scan documents longer than a grocery list, Perfect OCR can create multiple-page PDFs that you can e-mail, along with the translated text. It also works with documents in languages ranging from Portuguese to Russian [source: iTunes].

As someone who writes books on the history of popular culture, I've spent a lot of hours in libraries, thumbing through dusty old books and magazines and squinting at microfiche on flickering old readers. One of the most tedious and expensive parts of my work was making photocopies of the obscure, vintage information that I dug up. A few years ago, I got the inspiration to buy a small-footprint USB desktop scanner and stuff it into a big rolling briefcase along with my laptop. But that still required me to find a library carrel with access to a power outlet, and then to lug all the books, magazines and other materials over to it. Now that I can use my iPhone as a scanner, though, my next research project is going to be a lot easier.