by Wesley Fenlon
Prev NEXT
5 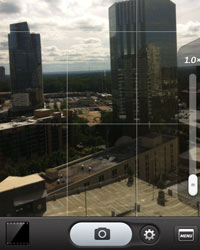 The gridlines in the Camera+ interface (which can be turned off, if you prefer) help you line up your shots and position your subject for optimal interest.
Screencap by HowStuffWorks

Like Camera Awesome, Camera+'s name implies a twist on the basic features offered by Apple's default photo-taking app. With more than 7 million downloads, Camera+ has become the go-to photo-taking app that fulfills the jack-of-all-trades slot once owned by Camera Genius. The $2 app offers a range of shooting features, like constant fill lighting from the LED, image stabilization, timer and burst modes, and a 6x digital zoom option. The range of editing tools is even greater, starting with a "clarity" feature that auto-tweaks images, much like Camera Awesome's "awesomizer."

Camera+ allows you to import photos taken in the default camera app and edit them with effects, filters and a digital "flash" that brightens overly dark images. Cropping, borders and sharing to Twitter, Facebook and Flickr round out the list of expected features.