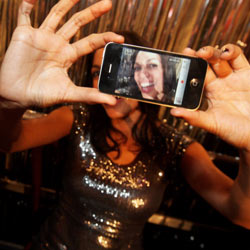 Even celebrities love their iPhone cameras. Here, Rosario Dawson snaps a self portrait at an event in Germany in January 2012.
©2012 Mathis Wienand/Getty Images

Point-and-shoot cameras are on the way out. Smartphone cameras are just too convenient -- and too good -- for dedicated entry-level cameras to last forever. The iPhone helped kick off the smartphone boom in 2007, and the camera on the iPhone 4S -- released in 2011 -- is easily one of the best on the market as of mid 2012. The high resolution, 8-megapixel sensor helps, but other camera elements are more important. The backside-illuminated sensor captures lots of light, which is important for shooting at night. The f2.4 aperture lets more light reach the sensor. A five-element lens increases image sharpness. And 1080p video shooting is just the icing on the cake.

Apple released a service called iCloud alongside the iPhone 4S. One of iCloud's features, Photo Stream, syncs photos snapped on the iPhone to cloud storage, as well as to a Mac or PC, streamlining the process of backing up photos or sharing them with friends. It's another convenience that makes smartphones killer pocket cameras. And they get better still: In addition to the iPhone's default camera software, there are tons of camera apps on the App Store that add the features and options of pricier dedicated cameras.

Here are 10 great iPhone camera apps you should check out if you like shooting pictures and video with your phone. Want to shoot a stop motion video? Love the idea of combining photography and social networking? Feel like doing some photo editing on the go and want something more complex than Apple's Photos software? Read on.