by Peter May
START COUNTDOWNNEXT
Start the Countdown 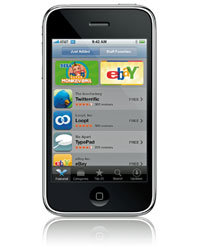 There are thousands of applications for Apple's iPhone.
Courtesy Apple

To say that Apple's iPhone is a phenomenon is clearly an understatement. When it was introduced in 2007, it caused a sensation, with eager gadget freaks camping out at Apple stores and AT&T retailers. The iPhone offered features unheard of in previous cell phones, along with Apple's expertise in product and user interface design. In addition to its cell phone capabilities, the iPhone offered a screen big enough to easily read e-mails, surf the Web or watch videos. This was the perfect combination of mobile phone and iPod. But there was much more to come.

Apple is known for keeping its technology close to the vest, which is why there are no Mac clones. For the iPhone, however, Apple opened up the vault enough to allow third-party developers to create applications to add functionality and fun to the fast-selling gadget. They even made it easier by providing a programming environment to simplify and speed the process. The catch? All applications must be approved by Apple and can only be sold on the company's App Store. Oh yeah, and Apple also gets a sizeable cut of all sales revenue.

The result has been an explosion of applications (or apps) that range from the sublime to the ridiculous. Not long ago, Apple announced the one-billionth download from the App Store. And the beat goes on. New apps appear daily, showcasing the creativity (and sense of humor) of their authors.

It's difficult to select 10 titles from the thousands of apps available, so we'll take a look at some great applications from different groups, listed in no particular order. And most of these iPhone apps will also run on the iPod Touch.