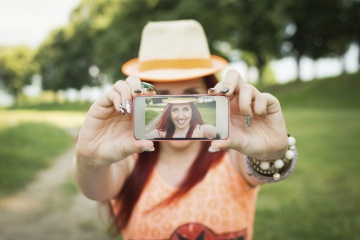 What vibe is this (pic of a) selfie giving you? Happy? Energetic? Self-conscious?
biglike/iStock/Thinkstock

For many of us, selfies have become second nature. Good hair day? Snap a selfie. New outfit? Snap a selfie. Dining out? Selfie. They've even been taken from beyond Earth's atmosphere. A Japanese astronaut, Aki Hoshide, snapped one while visiting the International Space Station. In what may be one of the coolest selfies of all time, Hoshide captured his likeness alongside the sun, Earth, a robotic arm, a spacesuit and the inky darkness of the universe [source: Day].

It isn't difficult to discern someone's mood when a selfie's snapped -- the images are, by their very nature, mood-driven. Whether you capture yourself with a smile or a fierce facial expression, scientists are figuring out ways to study self-portraits taken by smartphones and analyze what they say about you. Selfie studies will allow them to predict not only the subject's mood, but also the mood of an entire region [source: Blaszczak-Boxe]. It seems like a fitting undertaking, considering that in 2013, Oxford Dictionaries crowned "selfie" as the word of the year [source: Brumfield].

Since then, a team of researchers led by Dr. Lev Manovich of the City University of New York has been studying thousands of Instagram self-portraits in select cities, including Bangkok, Berlin, Moscow, New York and Sao Paolo, to analyze how mood (among other factors) affects selfie poses. While many wondered if it was even possible to determine an entire city's mood based on a smattering of self-portraits, the study has delivered promising results. Among the most intriguing findings: People in Moscow smile the least of all the selfie cities that were analyzed, while Bangkok and Sao Paulo selfie subjects looked the happiest. The researchers were even able to uncover data on gender and age differences: On the whole, women were more expressive than men in their self-portraits, but men older than 30 were more likely to post selfies on Instagram than women [source: Carusillo].

Another study, prompted by Manovich and researchers from the University of California, San Diego and the City University of New York, studied 1 million selfies posted on Twitter. Is it possible to gauge a person's mood -- or even a city's mood -- from a selfie? The answer, say researchers, is a resounding "yes." They posit the ability to measure "happiness" of geographic regions using selfies and hope to use the method as an alternative to traditional surveys [source: Blaszczak-Boxe].

What should I do if the home button on my iPhone stops working?
How to Fake a GPS Location on Your Phone
3 Myths About Smartphone Batteries That Need to Die