How to Remove Red-eye Using a Tablet or Smartphone App 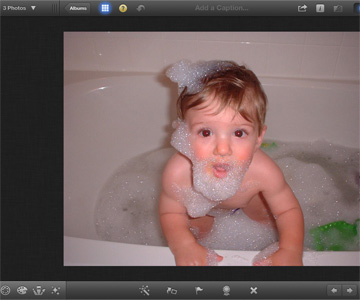 These days, most people take a significant number of photos on their smartphones and tablets. It makes sense, then, to edit on the mobile device instead of trying to shuttle photos to your PC and back again. Owners of iPhones and iPads have a great solution with iPhoto for iOS, which Apple released in 2012 with the release of the new iPad. And the really good news -- you could get it from the App Store for just $4.99 (when we wrote this in 2012).

You won't get desktop-quality functionality with iPhoto for iOS, but you can do some simple editing, including red-eye removal. Let's start with the iPad.

First, you need to open the image you want to edit. You can beam photos from your iPhone to the iPad or open images from your photo stream or camera roll.

In iPhoto for iOS, the red-eye tool comes bundled with other brushes, indicated by the appropriate icon in the lower left. When you touch the icon, all of the available brushes magically fan out before your eyes. The red-eye brush is first in line, after the quick repair brush (it's labeled as such, too).

Next, you select the red-eye brush and then tap into one of the pupils. You'll hear a cute sound effect, and then you'll see the pupil darken automatically. There are no additional controls -- you're at the mercy of the tool's prebuilt, default settings. All that's left is to tap the other pupil and then decide if you like the correction. If not, you can undo the red-eye removal, but you can't fine-tune pupil size or the darkness amount. You'll see our results in the second photo pictured.

The subject's right eye seemed fine, but the left eye was far less satisfactory. The pupil seemed too dark and just a little too big. Still, the correction is probably adequate for a quick post to Facebook or a text message to Grandma. And it's still better than the red-eyes themselves, which can make even the cutest babies look like visitors from the underworld.