by Debra Ronca
Prev NEXT
5 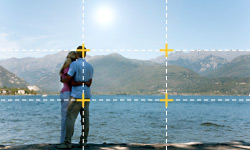 The rule of thirds
HowStuffWorks

Think of the image you're trying to capture as being divided into thirds, horizontally and vertically, meaning your image comprises nine squares, three wide and three tall.

Do you see where the lines intersect? Experts say that you should put the main focus of your photo at one of those points.

Also, for panoramic shots, concentrate on the middle (horizontal) three blocks. This is called center dominance and will give your photo depth and balance. You can see in the example above that the mountain range in the far horizon travels across the center of the photo.

For a good photo, take the time to find an interesting angle. Look at things from a different perspective. You might zoom in on something in the foreground to give the picture more impact. Keep an eye out for objects that might make your photo unique. For example, let's say you're taking a photo of the sea and sky from a boat. Think about adding the bow of the boat into the very bottom of the photo to add interest.

Lastly, ensure you have good lighting. The best picture in the world won't mean much if it's overly dark or overly bright. We'll talk more about lighting and exposure later.