Browse the article How are video games regulated in the U.S.? 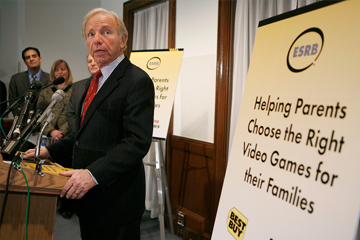 Sen. Lieberman speaks during a news conference with the Entertainment Software Rating Board (ESRB).
© Joshua Roberts/X01909/Reuters/Corbis

Everybody knows that video games are regulated by your mom, who steadfastly believes that gaming as a legitimate pastime pales in comparison to reading or playing outside. In other words, Big Game — aka the gaming industry — may be wasting its time lobbying Congress or other corporate interests to deregulate the industry for more mass appeal. What the industry needs to do is come to your house and convince your parent or guardian that playing "Minecraft" will, eventually, build character.

All right, we kid. First of all, 74 percent of moms play video games, so the stereotype of the nagging, out-of-touch mother — at least as it pertains to video games — can probably be abandoned [source: ESA]. Second, you might not realize that video game ratings are accepted on a purely volunteer basis — as are movies, for that matter [source: Crecente]. So if a studio or publisher wanted, it could theoretically pass on the whole process and just call the game unrated. But pretty much all Canadian and U.S. titles are rated, since the majority of stores that sell games will only carry those with ratings [source: ESRB FAQ].

And remember: It's retailers that are restricting the sale of Mature- or Adult-rated games to minors; it's not illegal to sell an 8-year-old an Adult title [source: ESRB FAQ].

This is all fine and good — and pretty easily understood. But you might be surprised to learn how the ESRB assigns ratings — or, —more specifically, how they don't. The panel of ESRB raters does not actually play the game. Which might give you a pause. Are the raters — and there are at least three of them for every game — just looking at the box? Nope, they're actually given a detailed report from a publisher about the pertinent content in the game — "pertinent" meaning the content that is considered the most extreme, as well as the overall game in context. They also get a DVD of the pertinent content so they can judge it for themselves. To ensure that publishers aren't sneaking more severe content in, they also have ESRB staff (although not the raters themselves) test-play the game after its release, while also making sure it complied marketing-wise — by checking the box and whatnot — with the ratings [source: ESRB Process].

Keep in mind that the raters aren't video game experts: In the words of the ESRB, they're "adults who typically have experience with children, whether through prior work experience, education or as parents or caregivers" [source: ESRB FAQ]. (In other words, it could be your mom.) That's one reason they're not required to play the hours and hours of gameplay for each game. Also, the ESRB argues, just playing the game wouldn't necessarily lead to a uniform and consistent rating.

Now, how well does the rating system work? Well, about 85 percent of parents understand the system, according to the ESRB, and 70 percent of parents actually use it [source: Agnello]. So to put it another way, your mom probably knows what she's talking about.