Why am I getting Amber alerts on my phone? 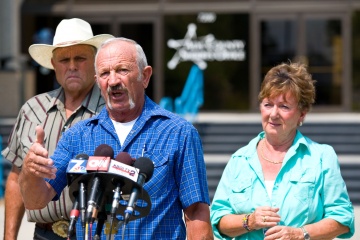 Mark John, Mike Young and Mary Young, shown here at a press conference on Aug. 11, 2013 saw an Amber alert about missing teen Hannah Anderson and reported that they had spotted Anderson and her abductor at a campground.
©STRINGER/Reuters/Corbis

You can opt out of some, but not all, of the alerts. You should be able to turn off the Amber Alerts and Imminent Threat Alerts via your phone settings or by contacting your cellular carrier. However, it is not possible to opt out of Presidential Alerts due to provisions of the WARN Act.

To turn off alerts on iPhones running iOS 6, go to Settings>Notifications, and you will find on/off switches at the very bottom of the screen under Government Alerts. On typical Android OS phones, you go to Settings>Wireless & Networks> More>Cell Broadcasts, where you should find three Emergency Alert Settings that can be turned on or off: "Show extreme threats," "Show severe threats" and "Show Amber alerts." You can also set them to vibrate only. On BlackBerry 10, you can go to the Blackberry Hub and choose Settings>Emergency Alerts, and then toggle three possible settings: "Extreme Threat Alerts," "Severe Threat Alerts" and "Amber Alerts." You can also change the language the alerts are displayed in. On Windows phones, go to the Applications List>Messages>More>Settings>Emergency Alerts, where you will find a switch for Amber alerts and a list for Emergency Alerts that allows you to choose to receive "Presidential only," "Presidential and Extreme alerts" or "all alerts." You can find out how to opt out or back in on other compliant phones from your wireless provider.

As of fall 2013, no presidential alerts have gone out, but there have been lots of others. In late October 2012, WEAs went out to many people in harm's way moments before Hurricane Sandy struck the East Coast of the U.S. On Feb. 7, 2013, a blizzard warning went out to a lot of areas in the northeastern U.S. Both prompted many to wonder what these alerts were, and why some people were getting them while others were not.

On July 17, 2013, a city-wide Amber alert startled a good many sleeping New Yorkers at 3:51 a.m. The alert was regarding a baby who was kidnapped by his mother from a foster care agency. The abductor apparently had a history of mental illness and violent outbursts; the alert led to the police locating the child.

The abduction of 16-year-old Hannah Anderson in San Diego prompted California's first statewide use of the WEA system, starting late at night on Aug. 4, 2013 and spanning multiple messages over several hours. It also expanded to other nearby states -- Oregon, Washington, Nevada and Idaho -- as new information came in. Idaho citizens out horseback riding unknowingly had an encounter with Hannah and her abductor at a campground. They saw the Amber alert on TV after getting home and contacted authorities, leading to her rescue.

The loud, late-night and early morning messages resulted in a lot of people saying they were going to opt out of the WEA system. Others expressed concerns that the program is a government intrusion, some fearing that it signaled access to their cell phones.

But it is a way to get vital emergency information to large numbers of potentially affected people when they are out and about, or not watching TV or listening to the radio -- the main avenues of the older warning systems.

As of July 2013, 656 children have reportedly been saved by Amber alerts since they began in 1996, and at least two kids have already been saved due directly to the new cell phone alerts [sources: NCM&EC, Fantz]. The first was an 8-month old in Minneapolis, Minn., where a teenager called just minutes after the alert went out -- the first sent through the new service in Minnesota --, leading police to the kidnapper's car and the baby. Another was an 8-year old in Cleveland, Ohio, where diners at a restaurant, all of whom remembered the alert from earlier, saw the suspect's vehicle outside. Two of them called 911 and followed the car for several miles and were able to tell police where the suspect was the whole time.

We tend to keep our cell phones nearby, and disaster can strike anywhere and anytime. We just have to weigh the potential annoyance of the alerts against the risk to ourselves and others around us if we don't get them.

Author's Note: Why am I getting Amber alerts on my phone?

I think it's cool that we have this capability, at least on our smartphones. The ability to save my life is a feature I would have added voluntarily. And I suppose if enough people get the messages, they can warn the people nearby who aren't carrying the latest devices. I've gotten nearly-local Amber alerts and flash flood warnings for my area so far. I've actually slept through tornado alarms before (until my significant other woke me up), but I use my cell phone as an alarm clock, so it has a much greater potential to wake me, especially with that screechy alert noise.

The alert definitely makes an annoying sound, but it's better that it isn't too similar to any of the other notification, ring or alarm noises we're all used to and might ignore. And I hear tell that you can change the sound on some devices.

Besides the fact that kids have already been rescued, imagine how many people could be saved if alerts went out to a good percentage of the populace the next time a hurricane or tsunami was about to hit. I, for one, won't be turning them off. Although I might be tempted briefly in the wee hours of the morning.