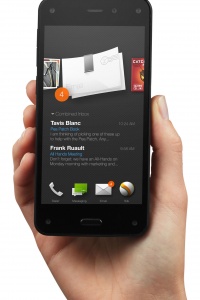 The carousel app display on the Fire phone.
Image courtesy of Amazon.com

The phone has a 4.7-inch (11.9-centimeter) IPS LCD high-definition display with a resolution of 1280 by 720 pixels (720p) at 315 pixels per inch (ppi). It is ultra-bright, with a brightness of 590 cd/m2 (or 590 nits), and incorporates a circular polarizer, an ambient light sensor and dynamic image contrast for ease of viewing in all light conditions. The display and back of the phone are reportedly made out of Gorilla Glass 3, and it has a rubberized rim for easy gripping. It is, like the majority of other major smartphones, a touch screen.

The Fire includes a 13 megapixel (MP) rear-facing camera with a five-element wide aperture f/2.0 lens, as well as a 2.1 MP front-facing camera and an LED flash. Both the front and rear facing cameras capture 1080p resolution video at 30 frames per second. A dedicated physical button on the side of the phone launches the camera (and Firefly) so that you can bring it up quickly.

For cellular connectivity, the phone supports nine bands of 4G-LTE, four bands of GSM and five bands of UMTS. For additional connectivity, it also supports 802.11a/b/g/n/ac WiFi, up to 300Mbps WiFi channel bonding, NFC (near field communication) and Bluetooth 3.0.

The phone has a myriad of sensors including four ultra-low power infrared cameras at 120-degree angles on each corner of the phone, four infrared LEDs, a gyroscope, an accelerometer, a magnetometer, a barometer, a proximity sensor and the ambient light sensor (mentioned earlier).

Its battery size is 2400mAh, and it's purported to last up to 285 hours on standby, 65 hours while playing audio, 22 hours while talking and 11 hours while running video.

Connection points include a Micro USB 2.0 port and a standard 3.5mm headphone jack.

The phone has dual stereo speakers and uses Dolby Digital Plus audio processing. It also comes with a custom designed headset with magnetic earbuds that incorporate a remote and microphone and have a flat cable to prevent tangling, as well as a Micro USB to USB charging cable and a USB power adapter.