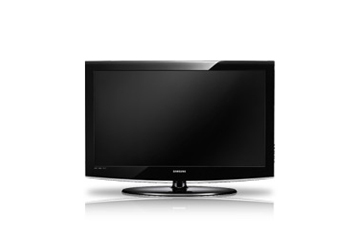 Jumping up to the 32-inch television models, we have this flat-panel set from Samsung. It's also an LCD HDTV. The contrast ratio of the LN32A450 is 10,000:1 -- not as impressive as the Panasonic set we looked at, but still a respectable result. It has a resolution of 720p, which still works well for a television of this size.

Samsung claims that you can view the screen at an angle of up to 178 degrees. That's important, because earlier LCD screens had the reputation of possessing a relatively narrow angle of view. If you tried to watch the television from too wide of an angle you wouldn't be able to see the image. Newer LCD televisions like the LN32A450 have largely eliminated this problem.

The manufacturer's suggested retail price (MSRP) for this set is $699.99, but you can find it priced for less than $520 online.