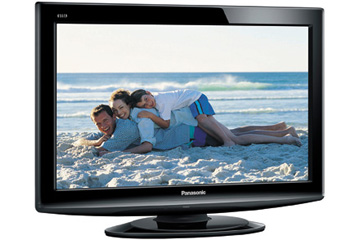 First up is the smallest television on our list. Panasonic's TC-L26X1 has an LCD screen that measures just 26 inches on the diagonal. It has a resolution of 720p, which means it can display 720 horizontal lines of pixels -- points of light -- and it uses progressive-scan technology.

If you know a thing or two about high-definition television sets, then you know that some are capable of showing 1,080 horizontal lines of pixels. The number of pixels a television can display affects the sharpness of the picture. Lower resolutions result in blocky images. But smaller televisions can get away with the lower number of pixels because of their size. What might look a little chunky on a big screen will be fine on a small one.

The set has two HDMI inputs, two composite inputs, an S-video input and a component video input. It also has a special input for PCs. You can even connect an iPod docking station to the television and view or listen to content from your iPod on your television.

It's not a big television set, but the TC-L26X1 has features that gain it entry on our list. Retail prices range from around $420 to $550.