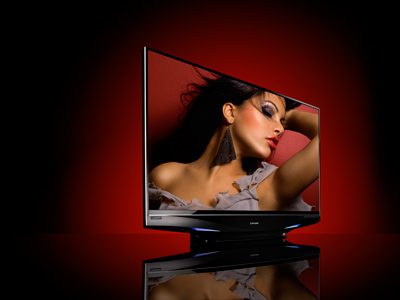 The Mitsubishi Laservue HDTV has the standard 3-D port — you can use active 3-D glasses with this TV.
Courtesy Mitsubishi TV

You can't use a standard television and expect active glasses to work. You must have some way to synchronize the alternating images on the screen with the LCD lenses in the glasses. That's where the stereoscopic sync signal connector comes in. It's a standardized connector with three pins that plugs in to a special port on a 3-D-ready television or monitor. The other end of the cable plugs into an IR emitter. The emitter sends signals to your active 3-D glasses. This is what synchronizes the LCD lenses with the action on the screen.

There are two different types of 3-D active glasses and they aren't compatible with one another. They are the E-D and ELSA style of 3-D glasses. While emitters for both styles work with the stereoscopic sync signal standard, E-D glasses will only work with an E-D emitter. While a pair of ELSA glasses can synchronize with an E-D emitter, the glasses won't perform properly. For example, when the E-D emitter sends a signal for the left lens to be transparent, the ELSA glasses will make the left lens opaque and cause the right lens to be clear.

Even if you have a 3-D-ready television, an emitter and a pair of active glasses, not everything on your television will appear to be three dimensional. Content providers must optimize the signal for 3-D first. While it's possible to modify existing footage into 3-D content, some providers prefer to create video with 3-D in mind beforehand. Currently, the easiest way to view 3-D content is to connect a computer to your 3-D-ready television using an HDMI cable, and then stream the 3-D content from your computer to your television. In the future, we'll probably see more DVD players capable of sending 3-D signals to televisions and perhaps even incorporate 3-D transmissions into cable and satellite services.

This Toshiba display uses a lenticular film to direct light to the viewer's eyes, which creates a 3-D effect.
AP Photo/Shinzuo Kambayashi

While 3-D technology is impressive, some people still want a solution that doesn't require them to wear glasses. There have been several attempts at creating a display capable of projecting images into a three-dimensional space. Some involve lasers, some project images onto a fine mist or onto artificial smoke, but these methods aren't that common or practical.

There's one way to create three-dimensional images that you may see in places like sports arenas or in a hotel during a big conference. This method relies on a display coated with a lenticular film. Lenticules are tiny lenses on the base side of a special film. The screen displays two sets of the same image. The lenses direct the light from the images to your eyes — each eye sees only one image. Your brain puts the images together and you interpret it as a three-dimensional image.

This technology requires content providers to create special images for the effect to work. They must interlace the two sets of images together. If you were to try and view the video feed on a normal screen, you would see a blurry double image.

Another problem with lenticular displays is that it depends upon the audience being in a sweet spot to get the 3-D effect. If you were to move to the left or right from one of these sweet spots, the image on the screen would begin to blur. Once you moved from one sweet spot to another, the image would return to a cohesive picture. Future televisions may include a camera that tracks your position. The television will be able to adjust the image so that you're always in a sweet spot. Whether this will work for multiple viewers of the same screen remains to be seen.

Some people experience a feeling similar to motion sickness after watching a lenticular display for more than a few minutes. That's probably because your eyes have to do extra work as they deal with the discrepancy between focus and convergence. But on the other hand, you don't have to worry about losing an expensive pair of active glasses.

Will 3-D television become the next big trend or is it destined to be a fad that comes back every couple of decades? It's too early to say right now. But the technology continues to improve. It may not be long before you duck out of the way the next time a baseball player hits a line drive toward the camera.